Home / The Hub / PlayCo intern Zoe Guy on Art, Appropriation and The Duchamp Syndrome
The Hub 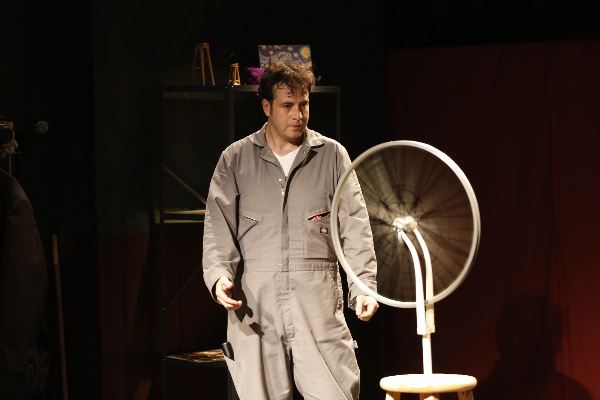 Playwright and performer Antonio Vega in The Duchamp Syndrome

Is art the work of original genius, or the physical embodiment of a happy set of accidents and interactions with the world that we call “experience’? For an artist, these interactions with reality create the climate for the persistent phenomena of artistic appropriation, or using a previously examined idea as inspiration to freshly interrogate reality.

The Duchamp Syndrome, a play sharply focused on the Mexican immigrant Juan and the consumerism, pop culture, and art that informs his imagination, is no stranger to artistic appropriation. Writer, actor, and director Antonio Vega manages to allude to and take from influential works of art; these pieces include the popular film American Beauty, the poem “The New Colossus by Emma Lazarus, comedy routines from Redd Foxx, modernist artwork, and Marcel Duchamp’s “Bicycle Wheel.”

Through Vega’s meticulous and creative appropriation of everyday objects and famous cultural artifacts, Vega productively examines the alienation Juan endures. Haunted by actions he committed as a child and by the all-encompassing love he holds for his childhood sweetheart, Juan continuously gets smaller and yet more profound.

The line between artistic appropriation, originality, and outright plagiarism is often difficult to pinpoint. More simply, does the profundity derive from the first artist credited with the appropriated work or from the artist that engages in appropriation?

On June 3rd, WNYC ran a story entitled “Your Originality in a Cut and Paste World” investigating how today’s teachers tackle the age-old problem of plagiarism. The plight of the modern day school teacher is exacerbated by the ease at which students can cut and paste virtually anything on the Internet into their work. In order to detect this academic dishonesty, teachers have largely turned to websites like turnitin.com, which scan through student’s work to detect instances of plagiarism. The investigation revealed that both teachers and students value turnitin.com as a way to avoid intellectual theft.

Outright plagiarism can tarnish careers of even the most established journalists, politicians, and authors. Take former New York Times reporter Jayson Blair, for example: after the San Antonio Express News discovered plagiaristic tendencies in Blair’s articles, further investigation revealed that 36 out of 73 articles carried varying degrees of plagiarism and systemic fraud. He has since retired from journalism and now works as a life coach.

Our culture places a premium of individuality and it’s partner, originality. Movies, plays, art exhibits, books, inventions, the list goes on, are viewed positively when someone deems it “original.”

But is anything ever truly original?

Author Jonathan Lethem would say no. In his 2007 Harper’s Magazine essay entitled “The Ecstasy of Influence,” Lethem interrogates the concept of originality in a piece that is almost completely plagiarized. The piece ironically analyzes appropriation through a completely original yet unoriginal cut-and-paste piece.

At it’s root, the article derides the concept of intellectual property, or notion that innovators have a fundamental right to their creations. Intellectual property, say’s Lethem’s plagiarism, is a construct created out of capitalistic imperatives. These imperatives create a strange area his plagiarism calls a “gift economy.” The presupposition is that gift economies force a connection between the buyer and the seller; for example, when art is consumed, people spend money and feel a connection to the artist.

Intellectual property laws and the culture that surrounds it force both the buyer and seller to place a premium on originality. The assumption is that when something is trademarked, patented, etc. then it must be the very first of its kind. This assertion is not only incorrect, but it largely ignores the reality that anything created is due in large part to the consolidation of human experience. Say you’ve seen the film American Beauty, then, if only by a tiny fraction, your thoughts are altered by this experience.

The Dada Movement notably involving modernist artist Marcel Duchamp, attempted to deconstruct reality by making common experiences and objects art. Situated during the First World War, Dada sought to comprehend the universe by re-imaging the definitions of art and originality. Like Lethem, the Dadaists took pieces from a variety of objects and appropriated them to create original unoriginal assessments of the world.

I suppose the main question, then, is: at what point does artistic appropriation leave the realm of plagiarism and become art?

After Juan, receives good news, he proclaims, “American Beauty!” For those unfamiliar with the opening sequence of Sam Mendes’ middle-brow film American Beauty, the plastic bags floating in the wind generated from Juan’s shadow’s handiwork and a fan may be a bit confusing. In fact, anyone unfamiliar with the many pop culture references, appropriations, allusions, or maybe more cynically, outright plagiarism, would assume that Antonio Vega’s Juan has an imagination teeming with originality. When, in reality, the plastic bags floating in the fan-generated wind is utterly unoriginal.

But why must the plastic bags floating gracelessly across the stage be unoriginal? Does appropriation diminish the artistic value of a given work? For all intents and purpose, the relationship between the plastic bags and the fan that moves them is art, as defined by Juan.

For him, “anyone can be an artist if he or she wants to be: one just needs to complete the assimilation of two or more useful objects in such a way that said assimilation deprives all involved objects of their usefulness.”

Author: buzzadmin
Read more articles »
« Life in a Box: Marcel Duchamp’s Life as an Exiled ImmigrantLooking for Summer Games? Check out What Eric Zimmerman’s Been Working on »